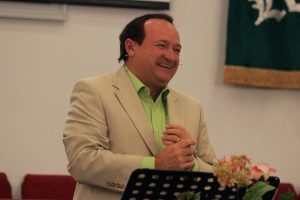 Chris began serving as Director of Missions, also known as Associational Mission Strategist, on June 1, 2019. He was not raised in church, but began attending regularly as a young teenager and was gloriously saved at the age of 14 at Calvary Baptist in Monroe, GA. In 1975, while in college, Chris was part of a church plant and was a charter member at Faith Baptist Church in Monroe.

Before surrendering into full-time ministry, Chris served as a firefighter, Recreation and Parks Director, Administrative Fire Chief, and a Fire Inspector. During that time, he faithfully served his church by teaching Sunday School, being a Youth Director, leading music and serving as a deacon. After surrendering to full-time ministry, Chris began attending Luther Rice Seminary and then transferred to New Orleans Baptist Theological Seminary Extension in Atlanta. He became Assistant Pastor at Faith Baptist Church in Monroe in October, 1994. One week later the pastor had a massive heart attack and Chris stepped in and began preaching weekly. In January, 1996, Chris was called as full time Senior Pastor. He began serving in a full time capacity in May, 1996. He stepped away from full-time ministry in July, 2009, and then was called as pastor of Dug Gap Baptist Church in  Dalton, GA, from May, 2010, until March, 2011. He was called back to Faith Baptist Church in Monroe as Senior Pastor in March, 2011, and served until becoming Director of Missions for Appalachee Baptist Association in June, 2019.

Chris married his wife Sandra in 1976. Sandra is a wonderful Bible teacher and a gifted speaker, who has faithfully served the Lord in many capacities over the years. She has spoken at ladies events and retreats throughout the southeast.

Chris and Sandra have 2 children, who are both married, and three grandkids. Chris has a desire to see more people reached for the glory of God and to help pastors, church leaders and others in their service to the Lord and with their lives. He also has a desire to help churches partner together to reach others, serve others, and disciple others. Chris can be reached at 770-601-2389 or email at pastorcconner@gmail.com.

The Latest from Baptist Press

How to Reach Us